Although climate impact analysis up to now has focused mostly on the impacts of gradual changes in climate, it is also clear that extreme, infrequent climate events (e.g. droughts and rainy periods) can have important impacts on society. One new method to research the risks of extreme climate events is the "Security Diagram" which aims to couple climate-related "environmental stress" with the susceptibility of states and the occurrence of "crises" (Alcamo, 2000; and Alcamo and Endejan, 1999).

An important question is, how can we define these inputs? Unfortunately, there is no objective method to define them and all three inputs are interpreted differently by different scientific disciplines. But in order to illustrate the concept of Security Diagrams, Alcamo (2000) and Alcamo and Endejan (1999) went ahead and pragmatically assigned very provisional values to these inputs:

Significance and limitations of Security Diagrams?

The advantages of Security Diagrams are that :

But Security Diagrams also have limitations - first of all such an approach can never substitute for detailed studies of risk and adaptation in different countries or regions, nor can it provide enough information for designing detailed adaptation strategies. Another major deficiency, and perhaps the most important, is that the three concepts on which it is based (stress, susceptibility and crisis) are not well-defined and do not take full advantage of relevant research in the social sciences. In this project, we propose to focus on this deficiency. We aim to improve these definitions by analyzing data from case study regions and drawing on knowledge from the social sciences. In this way the Security Diagram can become a more useful tool for assessing risk of extreme climate events.

The main objective of this project is to improve the computations of Security Diagrams by improving the definitions of the three inputs to these diagrams - environmental stress, susceptibility and environmental crisis.

This improvement will come from the analysis of data from three case study regions in the light of knowledge from social and natural science. We will focus on climate-related water shortages, although results from this project are expected to be applicable to other problems such as flooding and food shortages. We will also focus on case study regions with the aim to generalize information from them to other parts of the world. Another objective of this project is to bridge the gap between scientifically oriented climate impact community and the policy-oriented community concerned with "environment and security".

An Example of the Application of Security Diagrams. Because Security Diagrams bring together the concepts of environmental stress, susceptibility, and crisis, they can be useful tools for global risk assessment in various policy applications. To illustrate their use, we present the following example from Alcamo et. al (2000a). First environmental stress and susceptibility is computed for each country and each year as specified above in Section 1.2. These data are used with a Security Diagram such as the one in Figure 2 to compute the relative number of years in which each country had a high potential of water crisis between 1901 to 1995. The result is a map (Figure 2) which shows that 23 countries are computed to have a high potential for water crisis during 50% or more of these years. In the next highest category were countries such as India, China and Mexico. All in all, the countries computed to have frequent potential for crisis are those countries who in reality had ongoing water shortages during the 20th century. 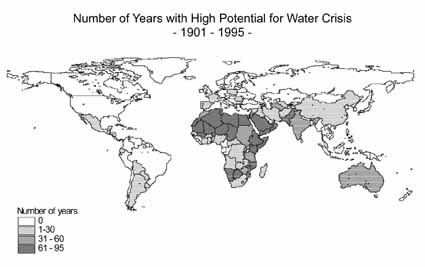 Next, Alcamo et. al (2000a) estimated the change in risk because of growing national income and climate change (Figure 3). It was noted that the number of countries in the highest risk category drops to 19, but some new countries such as South Africa and Australia now belong to this category. This is because these countries have drier climates according to the climate change scenario used in this example. Some countries such as China and India are computed to have a lower potential for crisis. This also stems from the climate scenario which shows an increase in precipitation in most parts of these countries. Moreover, this scenario assumes continued economic growth in these countries which the preliminary Security Diagram interprets as a reduction of their susceptibility to crisis. 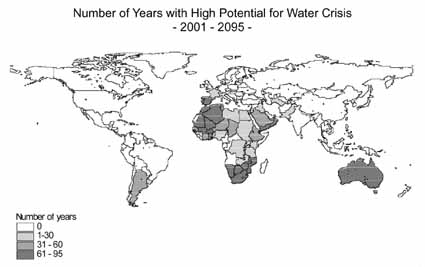 Potential Applications: Although the previous example is only presented for illustration, it does suggest a range of possible applications for Security Diagrams. For example: