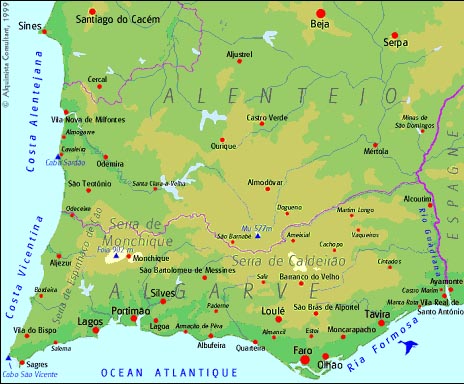 Located in the southwest of Europe, Portuguese territory has 92.000 Km2 (twice the size of Switzerland and a quarter of the size of Germany) and is formed by the inland region and the islands of Madeira and Açores. Portugal has around 10 million inhabitants and is one of the oldest established countries.

In its long history, Portugal was able to keep its monarchical system until the republican revolution of 1910. The first republic had lasted only 18 years, then António Salazar inaugurated his autocratic regime which lasted for over 50 years. Portugal early became a member of the UN and of EFTA, an important factor for economic development. After the death of Salazar in 1970, the revolution of 1974 finally lead to the second republic with the constitution of 1975. The democratization made possible Portugal's membership in the European Community in 1986. During the last ten years Portugal has succeeded in catching up with the most advanced European countries and benefited from a rather positive economic development with growth rates above the European average. The country qualified for the European Monetary Union (EMU) in 1998 and joined with 10 other European countries in launching the euro on 1 January 1999.

The year 2000 was marked by moderation in growth, inflation, and unemployment. The country continues to run a sizable trade deficit. Industry, services and agriculture are responsible for 39%, 56% and 5 %, respectively, of total employment.

Portugal has a temperate climate with average annual temperatures of between 10°C and 20°C. The average annual rainfall varies between 3100mm in the mountainous inland Northern regions and 400mm on the Southern coast. Portugal's administration is subdivided into 18 districts and two autonomous regions (Azores and Madeira).

The Security Diagrams Projects focuses on the two regions (the Algarve and Alentejo) in southern Portugal. Compared to other areas in Portugal the Algarve and the Alentejo have a relatively warm and dry climate and suffered from droughts in the past. During the summer temperatures can easily reach 35 degrees and tourism and agriculture are heavily dependent on fresh water.

What is typical for Portugal is its strong internal heterogeneity in economic terms. This dates back in history to times when family farms prevailed in the North while large agricultural estates ("latifundia") dominated in the South. Apart from agriculture, there are at least three factors which influence the economic structure of Portugal for the time being: tourism industry in the Algarve and coastal regions, the agricultural orientation in the Centro, Alentejo and Norte. The service sector is strongly developed in the Algarve, Lisboa e Vale do Tejo and the Alentejo.

Due to the strong economic diversity of the country, the economic wealth differs a great deal from region to region, with Lisbon nearly reaching the European average, the Alentejo and the islands regions remaining the poorest. This can only partly be explained by the extent of agriculture with a lower GDP intensity, but seems to depend mainly on the size of the industrial sector, being very limited in these regions. Portugal's unemployment rate was 4 % (in 2000) and thus below the European average. However, regional differences needs to be taken into account. By the end of 2000 the regional unemployment rate in the Alentejo was 5,5 % and in the Algarve 5,4 %.

With an area of 26,000 square kilometers, the Alentejo occupies fully a quarter of Portugal's territory, yet it is home to only 5 percent of the country's 10 million people. The Alentejo area is commonly known as the "bread basket" of Portugal. With very few exceptions all the major towns are mainly reliant on agriculture, livestock and wood. Typical products from this area are grain, sunflower, carthame, fruit, vegetables, olives, wines, cork, eucalyptus, lamb, pigs, kid, granite, schist and marble. Topographically the countryside varies considerably, from the open rolling plains of the south of the Alentejo to the granite hills that border Spain in the north-east. To feed the water needs of this considerable area a number of public dams have been constructed. In 2002, the Alqueva dam project has been finished. It is expected that this dam will turn the Guadiana River, which flows in from Spain, into the largest artificial lake on the entire territory of the European Union.

The Algarve is composed of 5.411 square kilometers with approx. 350,000 permanent inhabitants. Due to the attractiveness of the region for tourists this figure can swell to over a million people at the height of the summer making tourism the main source of income for the region's inhabitants.

The length of the south-facing coastline is approx. 155 kilometers and stretches about 52 kilometers to the north on the west. The administrative centre of the Algarve is Faro controlling 16 Municipalities, who in turn govern a total of 77 Parishes.

Both the Alentejo and the Algarve are comparatively poor regions and receive structural help from the European Commission. Portugal will receive a total EUR 19.7 billion (almost PTE 4 billion) from the Structural Funds for the 2000-06 period, as against the EUR 16.332 billion it received in 1994-99 (an increase of 20.6%). Together with four other Portuguese regions the Alentejo and the Algarve remain eligible for Objective 1 in the period 2000-06. Objective 1 promotes the development and structural adjustment of regions whose development is lagging behind. Regions that applies to this category are those whose per capita GDP is less than 75% of the Community average.